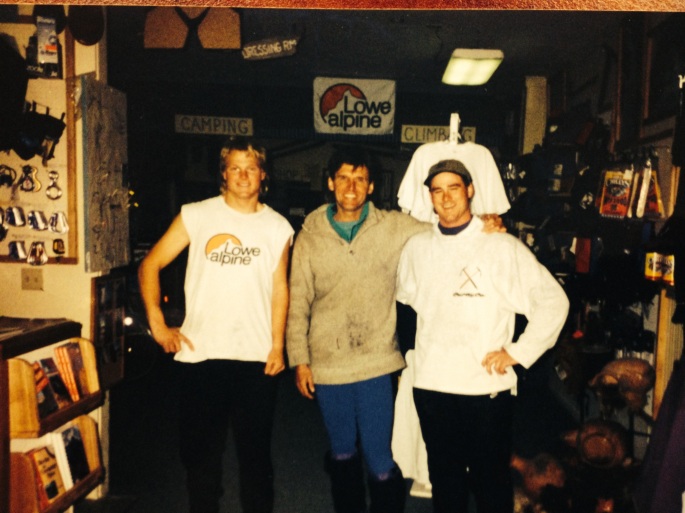 Back in January of 1993 my mom bought me & a friend a ice climbing trip in Ouray. The guides were Gorge Gardner & Mike O’Donnell. I only got to spend one day of my life climbing/learning with George but it was amazing and I remember the day as if it were yesterday.  I am so lucky to have been shown how to ice climb by a guy like George.

That day spent climbing with him changed my life, really.  After some college at Fort Lewis I decided to move to Dayton, Ohio and go to work for my Dad at his business. After one year I was miserable and depressed. I missed Colorado and the mountains and rock climbing terribly.

My Mom, who now lived in Montrose at the time knew I was struggling.  I went back to visit her for Christmas of 1993. As a gift she gave me and my best friend (Russ) a guided Ice climbing trip in Ouray. Russ and I both had never ice climbed before but climbed a lot of rock along the front range. I was so excited to try ice climbing. We met Mike O’Donnell at the Ouray Mtn Shop and after an hour or so our “special guest” arrived George Gardner.  He was dressed in all wool from what I can remember.  We all climbed a bit more and George was impressed enough with our ice climbing skills that he suggested we all go up and climb something along Camp Bird Road. Mike must of left at this point because it was just the three of us now.  We ended up at the Skylight.

I remember how much more exciting this already seemed to be, being out of the park and into the mountains.  I was beat by the time I made it to the top of the Skylight.  George was nice and so excited for us to make it. He went on and on about it.  Really made me feel amazing. We descended the route and headed back down….One thing that really stands out that day was the way he drove us back down Camp Bird road…that may have been more dangerous than the actual climbing.  His driving skills were insane. We thought for sure we wouldn’t make it back down alive.  I think we laughed the entire ride home. We certainly smiled all day long.

Back at the Ouray Mtn Shop ( it was dark now) we got a great photo with George. I was bummed the day was over and I was completely exhausted and starving. We said our goodbyes and I knew right then I would be back soon to climb with him again. I was now an ice climber for life.  On the way back to Montrose Russ and I were buzzing about the day. In that 35 minute drive we made plans to buy the gear needed and start climbing ice as much as possible. I made the commitment to myself to move back to Colorado. Which I did a few months later.
Shortly after our trip I came across a Rock & Ice magazine and there was a full page photo of George and Mike climbing together. They were wearing the same thing as they did when climbing with us. That photo still hangs in my climbing room.

Russ and I have been ice climbing ever since that day. Before every climb we do this warm up maneuver George taught us. It’s used to get both sides of our brains working.  We make the drive from Loveland and go to Ouray once a year and have a blast. Every time I pull into town I think of that very first day and I think of George and Mike.